In figurative art, the term still life refers to those paintings with flowers, fruit, fish, game or various objects as their subject. Until the beginning of the 17th century, it was an iron law that the importance of a painting was directly commensurate with the social or religious importance of the subject depicted (portraiture, religious popularisation), so it was unthinkable that an inanimate subject could be given pictorial dignity. But it was in the 17th century - thanks to the revolutionary genius of Caravaggio, who destroyed the principle according to which portraying inanimate subjects was an unworthy activity - that the process began that would lead to the pictorial autonomy of the mature dead, which would definitively take shape as an autonomous pictorial genre in the 18th century.

Genre painting, landscape painting and, in particular, still life had a great development in Naples - in the 17th century - thanks to the presence in the city of Caravaggesque and Flemish painters, the latter being particularly attentive to naturalistic investigations. In Neapolitan painting, the Still Life underwent a sort of transposition in a Baroque key, with a gradual shift in taste from the effect of admiration for the objective faithfulness of the representation to that of amazement and wonder for the fantasy of compositional invention.

Real consortiums of Nature Morte painters sprang up in Naples, monopolising for decades a rich and flourishing market financed by the new lay bourgeoisie, cultured and appreciative of compositions not only of floral taste but also rich in animals and refined objects of everyday use, considered as a symbol to be exhibited.

A singular artist (he was an abbot and a musician), a highly original florist, he is considered the greatest interpreter of Caravaggio's legacy. His is a joyful painting, shot through with a subtle vein of melancholy, focusing his investigation on the intimate vitality that springs from the plant world, in a joyful vibration of colour and light.

He began painting in the late 1660s in Naples, devoting himself in his youth to the theme of the vase with a few flowers: his first works were the two paintings with carnations and tulips in a glass bottle, preserved here.

The period from 1685 until his departure for Spain is considered the best of his artistic career. He painted Flowers, Fruits and Coots in this period and later the Flowers in the Copper Bowl, in the Correale collection.

In 1700, he returned to Naples with a life annuity and abandoned painting to devote himself to the theatre. 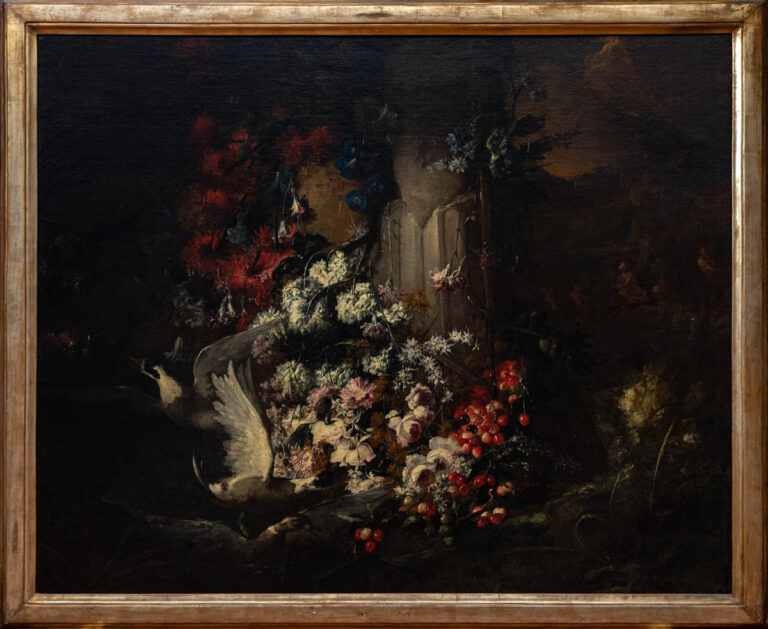 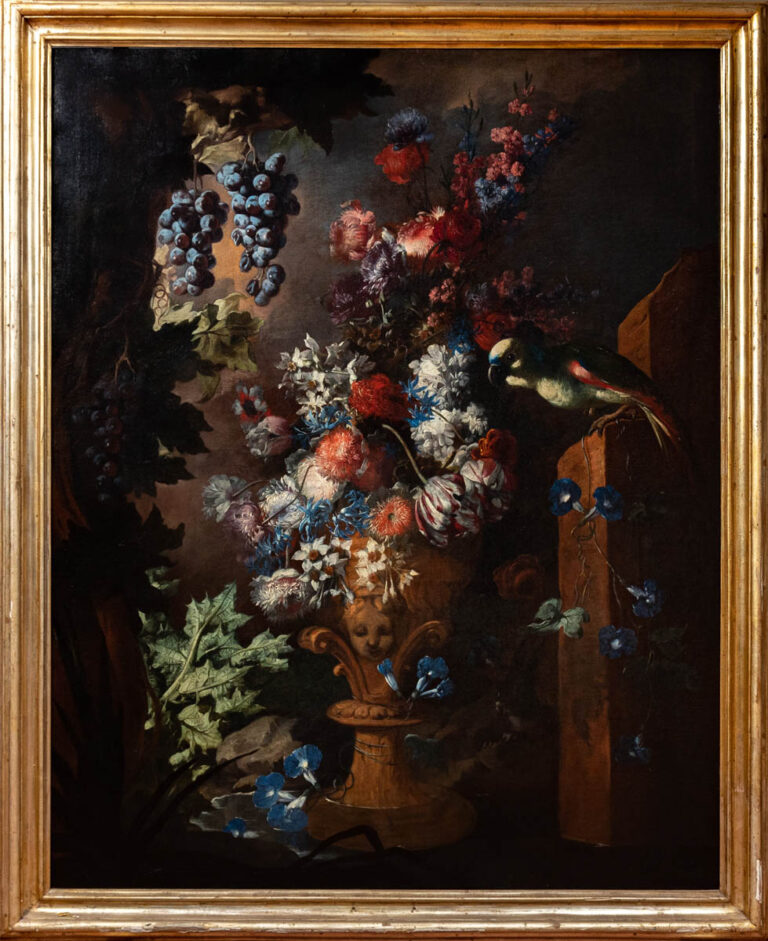 Vase with flowers, grapes and parrot oil on canvas